Resetting Breakfast with a Squash Gratin

After spending last evening watching with horror the rantings of unhinged Facebook friends (and friends of friends), and then dreaming about the whole fiasco that was Election 2016, I woke up this morning thinking about making a hearty breakfast. But we didn’t have any potatoes (my usual go-to side dish when I make an omelette breakfast). So I decided to reset my expectation with a Burpee's Butterbush Squash gratin. 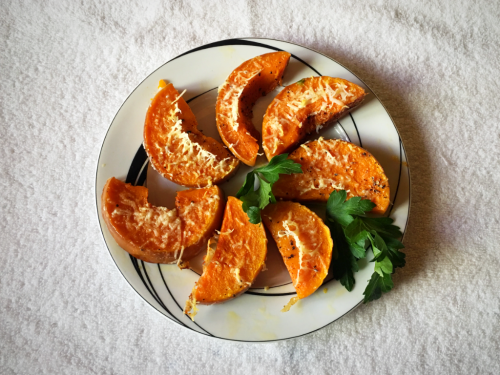 We bought a Burpee's Butterbush butternut squash a few weeks ago and it has been sitting on my kitchen counter ever since, just daring me to do something with it. I'd been thinking about making a squash gratin with it and decided that now was the time before it got any older. I wanted a savory/sweet dish to complement the omelette.

A Burpee's Butterbush squash is shaped like a small butternut squash, but it has a golden orange rind and, according to the farmer's market vendor who sold it to me, it's sweeter than a regular butternut with more intense flavor.

This Butterbush was so cute, sitting there on the vendor's table, that we brought it home to give it a try.

According to people who know (not me -- I don't have a garden), the plant also takes up a lot less space in a garden than the traditional butternut squash plant, so it’s a nice squash to grow when your yard is small.

These squashes are a good source of Vitamin A. They also have a fairly medium-to-low glycemic load, so it makes a good substitute for other more starchy vegetables. I paired it with my arugula-feta omelette and strong coffee, to make a nice nutritious breakfast -- just the thing to start me up after a night of Facebook-watching.

Obviously, this wasn't a gratin in the traditional sense -- no breadcrumbs or croutons adorned the top as it baked for a half hour or so. It is also a simple recipe in that the hardest part was slicing the squash and grating the pecorino romano that I sprinkled on top after it had been in the oven for about 20 minutes.

Here's what you need to make 4 servings

Slice a small Butterbush squash in half lengthwise, then slice the halves into 1/2 inch half-moons

Season the slices with salt and pepper

Grate some parmesan, pecorino or other hard cheese

After the 20 minutes is up, sprinkle some of the grated cheese on the slices and put them back in the oven for another 10 minutes or so.

I tried to leave the squash in the oven long enough so that the cheese would form a brown crust, but didn't quite achieve that goal. I'll have to do some more experimenting the next time I make this.

The farmer's market vendor was right -- this Burpee's Butterball squash is sweeter than traditional butternut squash. I could also see resetting this recipe and baking this squash with brown sugar and cinnamon -- making it a sweet, dessert-like dish rather than this savory one.