Cooking for the Quarantine - Day 2

For this morning I made a four-egg omelette with hothouse cherry and pear-shaped tomatoes and spinach, feta cheese and red pepper flakes. Bob and I both use peppers when we cook - fresh jalapeños when we can get them at the Farmer's Market, dried when we can't. Since I didn't feel like chopping peppers this morning, I threw some red pepper flakes at the eggs and called it good. 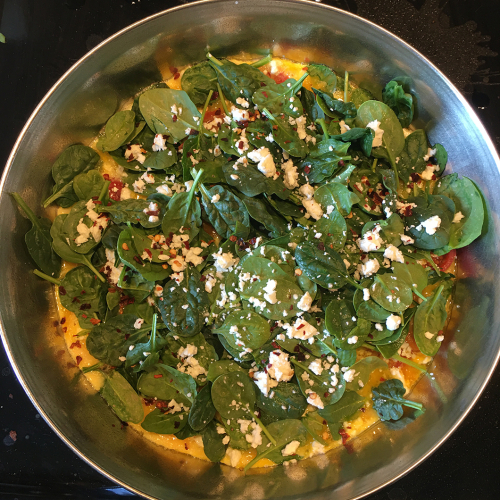 We killed off most of our bread Bob had baked on Monday - I'm trying to get him to set up another loaf to rise so we can bake it tomorrow. Anyway, we made sandwiches for lunch with the bread. I had the last of the deli turkey and Bob the ham. We topped our sandwiches with pepperoncinis and finished our meal with a mug of the beet and sweet potato soup from the recipe book, "Raw," by Solla Eríksdottír. For this soup, I used golden beets rather than red — I just didn't feel like dying my cutting board with red beet juice. 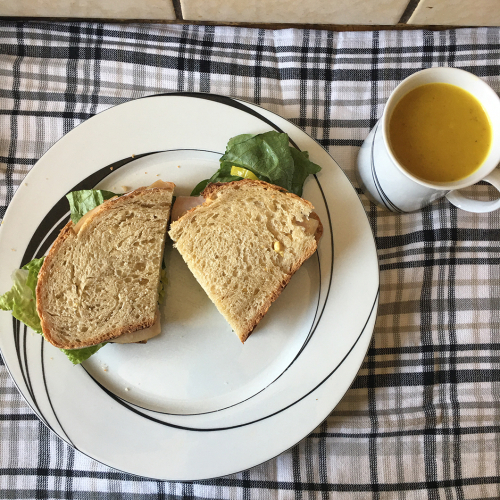 Out for a walk

We may be self-quarantining, but we still get out for our walks. Our Chihuahua, Desi, was feeling really good today — she wanted to walk over to Lincoln Avenue and back home, a distance of about a mile. Desi, princess that she is, doesn't like walking in the rain or in the cold, or when it's too hot. Obviously, the temp was just right, like it was for Goldilocks, although it is supposed to rain later.

There were several other people out on the sidewalks with the same idea, taking their dogs for a walk in the lovely sunshine. The people we passed on the sidewalk steered wide so we all had room - the dogs would have liked to get closer for a sniff or two. It was a spirit-raising walk - we got a little sunshine and exercise before sitting at our desks.

Getting exercise where I can

This afternoon, I had to get on my bike and ride over to the senior center to feed the feral cat, Willow. I swear, she may be feral but she is the fattest, healthiest one I've ever met. I suspect lots of people feed her. I promised someone who contacted me through my Facebook page that I would feed the kitty Mondays, Tuesdays and Wednesdays, but honestly, I think Willow could miss a meal and be just fine.

As I expected, there wasn't a ton of car traffic this afternoon, so my bike ride was fun and efficient. On my way home I saw two little girls around age 6 or so, on the sidewalk with a labradoodle on a leash. I passed them on the street and they started running to race me on the sidewalk as I pedaled away. The three of them (girls and labradoodle) kept up with me for about two houses then stopped - giggling and shouting. It was a spirit-lifting!

Bob is on the hook for dinner tonight - he's supposed to make a lasagne with ground turkey. He found the recipe from a food platform (I have no idea which one). We could use the leftovers, so I hope he makes it.

"Leftovers?!?" I exclaimed, "What happened to the lasagne?"

"I forgot to take the ground turkey out of the freezer. It's still hard as a rock."

So we finished off a kale, white bean and sausage soup, and a black bean, rice, and cilantro side dish.

We better have the lasagne tomorrow.