Cooking Shows in the Age of Coronavirus

Finally! The lasagne came out of the oven, its cheese bubbling and the top crispy brown. I'm smelling leftovers for the rest of the week. 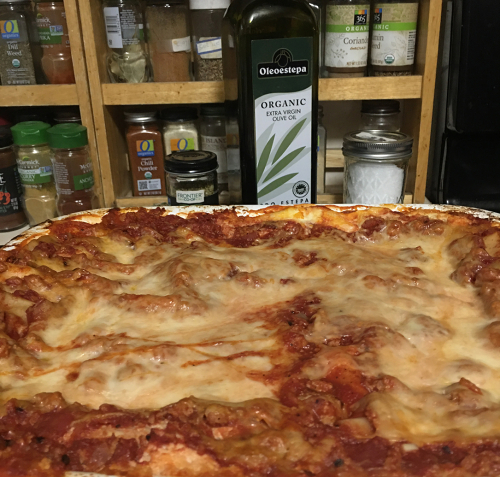 While we self-quarantined at home, Bob made this lasagne

Although we have been eating lots of variety and (more or less) healthily, the novelty of self-quarantining is wearing thin — I'm feeling the pinch as both of our businesses slow to a crawl. The weather has turned dreary and cold again, then for a change, Desi the Wonder Chihuahua decided she wanted to walk in the rain. Unfortunately for her, I wasn't up for that action, so we went home and Desi sulked on her California King bed.

I have a yoga app, so I thought this would be a good time to learn about breathing. And, to do some stretching. Desi got off her bed and her downward dog next to me as I worked my way through video. She was trying to get me to give her an early dinner.

I'm very out of yoga shape, nothing stretches very well and I really ached after I was done.

Ming's episode was all about my favorite comfort food, nachos. His guest was Ken Oringer, a James Beard Award-winning chef whose recipe was for sumptuous and decadent king crab nachos. They fried their own tortilla chips (I usually do this, myself. For some reason, homemade tortilla chips just taste better).

Anyway, he made a creamy cheese sauce with cheddar, Velveeta (Eewwww. Just, eewww!) and Oaxaca cheeses, which he added to the pot that had sautéed onion, garlic, a type of Basque sausage called "espellete," heavy cream, and milk. Then they made a salsa of tomatillos, avocado, lime juice, cilantro. They blended the salsa (I usually make mine a little chunky), but I have to admit, that salsa looked amazing. I'm adding that salsa to my little binder of salsa recipes.

Ultimately, they broke up the king crab on top of the tortilla chips and drizzled the salsa and the cheese sauce on top, then topped all that with homemade pickled jalapeños, thinly sliced radishes, and scallions.

Of course, as with most cooking shows, they did a marvelous job plating the dishes and making even nachos look beautiful — when I make mine, they look like a marvelous mess. Of course, Ming and Ken dug in. I don't believe Ming actually eats much of what he cooks on his show — he is the most in-shape tele-chef (a-Mazing biceps) I've ever seen. If he ate all those recipes as meals, he would be as big as a house!

Lydia's Kitchen was focused on desserts. Although I'm not as big on sweets as I used to be, her recipes gave me a few ideas for some easy parfait breakfasts, since I do like my sweets for breakfast when I do eat them. I can use the frozen blueberries that are residing in the freezer — I bought them for a cleanse weekend we did recently, and we still have most of one bag and a full, unopened bag.